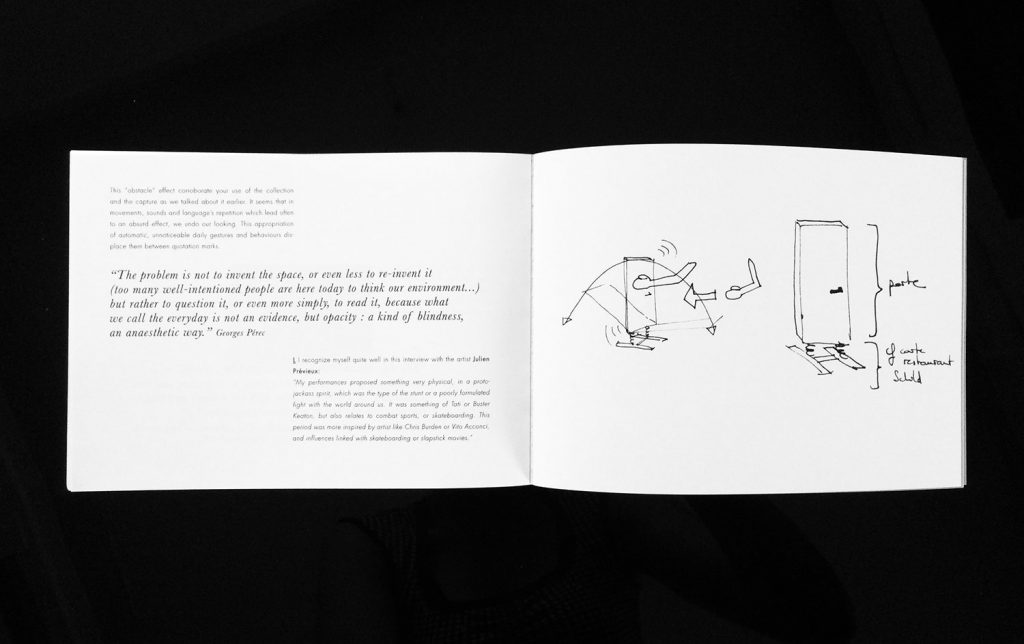 The term « blank » comes from the French word « blanc » or the proto-germanic « blank ». More than the color, white is what is not « really », the unthinkable nothing : a white wedding, a blank page, a blank shot, a blank computer screen, etc. thus it is never the absolute «  nothingness » but rather a simulation or a container waiting for content – whether it be of a mind, a space or a sheet.
How then can we think of « blank » singularly ? Blank seems to not exist in the concepts offered by Western thought. A blank space is a space in negative, following an erasure, a disappearance or (and) else, pending, in transit. It is an in-between : «  », hole, void, vacant, absence, lack, free, silence, a memory lapse. These derivations from which, many derivations in different resonances, could unfold, enable us to build several entrances into the work of Laure Catugier and Yooree Yang.

Stuck in its etymological root, to imagine a blank space is often to create a white projection – the white as the subtraction tonality. The color has a bound relationship to, is considered synonymous with the neutral, objective, or even innocent : « whiter than white ». Thus arises, a problematic relation with its « reverse » : black which builds here, directly within the language roots, problematic ideologies infectiously growing in past and current histories.
White is linked to « clean » whether it be of the mind, of actions or of a room. The Western notion of emptiness is bound to the contradictory and mythical absolute « absence » which neither the philosophy nor the cleaning ever succeeded in reaching.
« The most remarkable thing is that in the West people hardly lend any importance to the inescapable truth – once cleared, the table remains a table – and they endlessly persist in wanted the table to be clearer, and cleaner […] » (1)
This household concern inevitably leads us to the word « vacuum » from the latin « vacuus » for « void », in its definition of a space devoid of matter (which brings us in the 19th century invention of our cherished vacuum cleaner).

Coming back to our chromatic tonalities, it is interesting to note that the false opposition of white to black, sparks thoughts of the void : nothingness as black hole.
In a first visual analysis, we find again these two imaginaries in Laure and Yooree’s works. In her photographs, Laure avoids the shadows, aspiring to planarity illusion, spaces’ translation into two dimensions. Here blank space is also flat, echoing the architectural tabula rasa. On the other hand, Yooree’s painted and photographed landscapes stagnate in a perpetual twilight : this very precise moment when we are hardly able to distinguish between forms and our imagination must compose a space in front of us.
This first distinction visible in the two artists’ works could perfectly illustrate the well known Jun’ichirõ Tanizaki’s essay’s In Praise of Shadow. Even though it is quite dated, it presents two antagonistic conceptions of the void competing in our daily uses.
“An empty space is marked off with plain wood and plain walls, so that the light drawn into it forms dim shadows within emptiness. There is nothing more. And yet, when we gaze into the darkness that gathers behind the crossbeam, around the flower vase, beneath the shelves, though we know perfectly well, it is mere shadow, we are overcome with the feeling that in this small corner of the atmosphere there reigns complete and utter silence, that there in the darkness, immutable tranquility holds way. The “Mysterious orient” which westerners speak probably refers to the uncanny silence of these dark places […] Ultimately it is the magic of shadows.” (2) Precisely this mystery and, ambivalence seems to drive Yooree to look for a certain kind of tranquility, magnetism of the unfathomable. These different philosophical concepts which feed artistic imaginaries lead us with prudence towards a part of Buddhist philosophy’s concept of nothingness, « Śūnyatā ». Whereas in its Western conception the void is understood as a vacuum, a space that contains « things » not yet or no longer; in the Buddhist ideology and its derived aesthetics, the void is not a matter of negation but of the relation of the in-between. The in-between presence and absence, in-between of there is and there is not and the availability of each. Thus, a movement analogous to breathing,  the void as the waiting for the full, where the opposed ceased of being opposed but rather are linked through a constant and indispensable flux.

Then, the void becomes also « pause », falling within a length of time – idea which brings us to a new blank’s derivation : the silence. As the emptiness, the silence is stuck in its impossible realisation. « There is no such thing as an empty space or an empty time. There is always something to see, something to hear. In fact, try as we may to make a silence, we cannot » (3). Thus, the silence could only be understood as a sequence, as the absence of presence, which arrives before or follows after. Laure’s aggressive hands’ clapping in her videos ROOM m2 and ROOM m3 (2015) attempt an absurd relation where the noise, then the silence, become the measure of the empty space.
In Yooree’s work, the silence exists in the alliance of the opposites and through a composition game, through maneuvers which connote, rather than attempt to represent the silence. The pictures are mute, depopulated : cleared from presence, the landscapes appear hostile, unfamiliar.
« Depopulated, the landscape estranges, it renders uncanny [le paysage dépayse] : there is no more community, no more civic life, but it is not simply « nature » […] Uncanny estrangement occurs in the suspension of presence : the imminence of a departure or an arrival, neither good nor evil, only a wide space, and a generosity that allows this suspension to be thought and to pass ». (4)
Unlike some of her previous work (notably her photographic work), Laure is present in her two videos : the body is here, it moves, hits, rubs. Yet, the absence of pictures, or rather, the reduction to the room’s measurements, allows only a ghostly presence. In a reverse process, she is giving back an identity, a visible face to Le Corbusier’s modulor’s system : attempt for a norm, once again revealed as absurd in Modulor1m83.

Blank can also be used as a verb : to erase, to bare, to undo, to empty, to dismantle, to vacuum up, to exhaust. Associated with a noun, blank renders the noun pointless – functionless. for both artists, the borrowed and depicted architectures are non-functional, non-constructive architecture, emptied, as with Malevitch’s Architectons who named them « Blank architectures »,
« They become the theoretical tool that transforms the object into the object, dissolving its originally associated meaning ». (5). Thus, Yooree’s modules match this description, they are erased units : blanked, waiting containers.
Laure’s door (DOOR, 2015) is also cut from its function and become an absurd object stuck in its repetition and its « Jack-in-the-box » appearance.

The two artists’ represented, collected and uninhabited(able) spaces and objects are surprisingly present, substantial, mobile and even noisy. This is not here an attempt to avoid their differences by using the same verbal toolbox but rather to propose some axes to be continuously unfolded.

«  0
Nothing is to something as zero is to number, as black is to color, as silence is to sound : neither simply its absence or a negation, nor yet just a variation on its theme […] » (6)